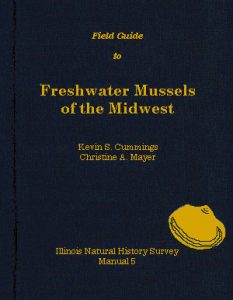 In 1992, the Illinois Natural History Survey published a first-of-its-kind field guide to freshwater mussels of the Midwest written by INHS investigators Kevin S. Cummings and Christine A. Maye. Material from the 1992 field guide has been adapted for presentation online.

This guide includes 78 species, arranged in groups that approximate their systematic relationships; therefore, similar-looking species will often, but not always, be grouped together.

The first thing to keep in mind when trying to identify a shell is that freshwater mussels are extremely variable with respect to coloration, shape, and size, both within and between species. Although some species (especially the pigtoes) can be difficult to tell apart without the aid of a specialist, nearly all of the mussels in the Midwest can be identified using a combination of written descriptions, photographs, and range maps. Perhaps the easiest way to identify a mussel shell is to match your specimen to one of the photographs. If you can’t find an exact match, pick the one that looks the closest and refer to the text for the key characters and similar species to eliminate those that look similar. Once a tentative identification has been made, check the range map to see if the species you have chosen is found in your area. When the range map and photograph have been checked, read the full species description to confirm your identification.

To identify specimens, you first need to know a little about the basic anatomy of a mussel shell (Figure 2). Although this field guide keeps jargon to a minimum, the descriptions include technical terms used to describe anatomical features. Definitions are those used by Parmalee (1967) or Burch (1975).

The depth of the beak cavity is often used to distinguish between species. The beak cavity can be absent, shallow, moderately deep, or deep.

External characters used to identify species include the shape, number, and arrangement of pustules on the surface; the presence or absence of a sulcus or shallow depression running from the beaks to the ventral margin of the shell; and the prominence of the posterior ridge. In addition, the color of the perio- stracum (outside) and nacre (inside) and the external texture of the shell are often used to differentiate between species. Although many species are highly variable with respect to color (both outside and inside), others are relatively consistent in this regard. Some mussels lacking obvious bumps, ridges, or pustules have a characteristic rough or satinlike finish on the external surface.

The characters mentioned above are those most often used to discern between species on the basis of the shell. Most other anatomical features used in identification are associated with the animal itself, often called the “soft parts.” Some of the most often used features include the size and shape of the marsupium, glochidia, labial palps, and siphons. References to these features can be found in more comprehensive books on mussels (e.g., Baker 1928, Parmalee 1967, Oesch 1984).

Each account begins by listing a common name as well as the scientific name of the mussel. The names in this book are largely those used in American Fisheries Society Special Publication 16, Common and Scientific Names of Aquatic Invertebrates from the United States and Canada: Mollusks (Turgeon et al. 1988). Exceptions to this list are that subspecies are not recognized and a few modifications have been made to reflect changes since the publication of the 1988 list (Hoeh 1990, Cummings and Berlocher 1990, Bogan personal communication). The text in each species account is divided into the following sections: other common names, key characters, similar species, description, habitat, and status.

Other common name(s). Common names given to mussels are regional and can vary considerably from place to place. Some of the common names frequently encountered in the literature or in the field are included in this section. Differences in common names can create problems for the governmental resource agencies responsible for managing mussels. The proper identification and recording of species is essential for accurate data gathering and analysis of commercial harvest statistics or sightings of endangered species.

Key characters. This section summarizes a few of the more prominent features used to identify each species. The key characters may be enough to identify a particular specimen, but in most instances you should read over the entire description to confirm your identification.

Similar species. A list of those species similar in color, shape, and size is included for comparison, when some doubt as to the identity remains. The species listed may or may not be closely related.

Description. The descriptions are for shells only and do not include any of the characteristic features of the animal itself. The first paragraph describes the external parts of the shell, including coloration, shape, size, surface features, and thickness. A near-maximum adult size is also given in inches and its centimeter equivalent; most specimens will be somewhat smaller. The second paragraph covers internal features, including the pseudocardinal teeth, lateral teeth, depth of the beak cavity, and nacre color.

Habitat. Mussels vary considerably with respect to their habitat preferences. Some are restricted to a specific habitat type (for example, small creeks), whereas others can be found in almost any permanent body of water. Each account lists the size of the stream (headwater, creek, small, medium, or large river) in which the species is typically found. The habitat descriptions also include statements on the composition of the bottom (for example, silt, mud, sand, or gravel) and, occasionally, water flow.

Status. Over half of the species in this field guide are considered rare, threatened, or endangered by at least one of the states in the Midwest. Each account gives a general statement regarding the species distribution and abundance, often followed by information on its status in individual states. Not all states use the same criteria in determining or labeling special-status species. For example, Missouri uses “rare” as opposed to “threatened” for those species that are likely to become endangered if conditions worsen.

This field guide also employs several categories used by the U.S. Department of the Interior. An “endangered” species as defined by the federal government is any species that is in danger of becoming extinct throughout all or a major portion of its range. A “threatened” species is one that is likely to become an endangered species within the foreseeable future throughout all or a major portion of its range (USFWS 1991b). Federal candidate species are divided into several categories (USFWS 1990b). A “Category 1” classification is used for species for which the U.S. Fish and Wildlife Service has “enough substantial information on biological vulnerability and threat(s) to support proposals to list them as endangered or threatened species.” Species for “Category 2” status are those for which there is some evidence for vulnerability but not enough data for them to be listed as endangered or threatened. “Category 3A” species are those that the Fish and Wildlife Service considers extinct.

The photographs in this field guide are of specimens in the mollusk collections of the Illinois Natural History Survey, Champaign (INHS), and the University of Illinois Museum of Natural History, Urbana (UIMNH). The shells were selected because they were considered representative of their species. In cases in which males and females are noticeably different, both are shown. Each plate shows the right valve, so that the front or anterior end is always to the right. The photos are not to scale, but much larger species are usually shown somewhat larger on the page. The length of each specimen shown is given in the photo caption.

Although this field guide is intended for use in identifying freshwater mussels, we have included photographs of representatives of some of the other bivalves found in the Midwest: a representative of the native fingernailclam or peaclam family (Sphaeriidae), the introduced Asian clam (Corbicula), and the recently introduced zebra mussel (Dreissena). Both the Asian clam and zebra mussel are prolific breeders and have caused severe problems for industries and municipalities that utilize lake or river water by clogging intake lines and blocking the flow of water. The zebra mussel in particular is having a major impact on our native mussel species. Zebra mussels will attach themselves to any firm object, including freshwater mussels. A colony of zebra mussels attached to a freshwater mussel will impede the flow of water, food, and oxygen and will eventually kill it. Researchers are investigating ways to control these unwanted pests without further endangering other species found in our rivers and lakes.

Knowing where a specimen was collected can be very helpful when trying to identify it. The range maps in this field guide cover the Ohio, Mississippi, and Red river drainages in Minnesota, Wisconsin, Iowa, Missouri, Illinois, Indiana, and Ohio and part of the upper Great Lakes drainage (Figure 3). Mussels endemic to the Ozarks or those that reach the northern limit of their range in southern Missouri are not included but can be found in Missouri Naiades. A Guide to the Mussels of Missouri (Oesch 1984).

The maps on the following pages show the approximate historic ranges of mussels in the Midwest. The maps are not meant to be comprehensive and will undoubtedly change as additional data are collected. Within these ranges, gaps in distribution may occur in areas not suitable for mussels. For example, the cylindrical papershell occurs throughout much of the Midwest but is found only in small creeks and the headwaters of large rivers; it is therefore absent from many of the streams within its range.

BRIGHT, R.C., C. GATENBY, D. OLSEN, and E. PLUMMER. 1990. A survey of the mussels of the Minnesota River, 1989. Bell Museum of Natural History, University of Minnesota. 36 pp. + illustrations and appendices.

A full list of literature cited in the 1992 guide is available.