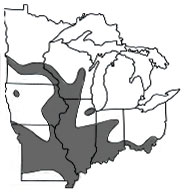 Habitat: Medium to large rivers in mud, sand, or gravel.

Status: Widespread and common throughout much of its range. Species of Special Interest in Ohio.